The Articles in this work are adapted from:

Reproduction and Repurpose granted by Author. 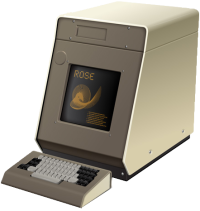 PLATO was designed and built by the University of Illinois and functioned for four decades, offering coursework (elementary through university) to UIUC students, local schools, and other universities. Courses were taught in a range of subjects, including Latin, chemistry, education, music, and primary mathematics. The system included a number of features useful for pedagogy, including text overlaying graphics, contextual assessment of free-text answers, depending on the inclusion of keywords, and feedback designed to respond to alternative answers.

Rights to market PLATO as a commercial product were licensed by Control Data Corporation (CDC), the manufacturer on whose mainframe computers the PLATO IV system was built. CDC President William Norris planned to make PLATO a force in the computer world, but found that marketing the system was not as easy as hoped. PLATO nevertheless built a strong following in certain markets, and the last production PLATO system did not shut down until 2006, coincidentally just a month after Norris died.

Fast forward to today - a conservation effort was undertaken by a group grass-roots enthusiasts who worked to instantiate the last functioning version of what was the PLATO system (CYBIS). Use of the CYBIS system was granted for non-commercial purposes to the hobbyist community and lives on in the form of Cyber1.Org.

Cyber1 is the name for the mainframe-based CYBIS system. To those familiar with PLATO, CYBIS, or early NovaNET, cyber1 will feel like coming home again. Cyber1 runs on top of NOS, the CDC mainframe operating system, generously contributed by BT Consulting & Systems Integration Services (formerly Syntegra). NOS in turn runs on top of DtCyber (watch out, this is a link to a .pdf), a software emulation of a CDC Cyber mainframe, created by Tom Hunter.

Cyber1.org is a group of people dedicated to the preservation of the world's first computer-based community, PLATO.

PLATO is a computer-based educational system created at the University of Illinois Control Systems Laboratory. The idea was first discussed at the University in 1959, in a long series of meetings led by Chalmers Sherwin. At these meetings it was concluded that computer-based education should not be pursued. However, the director at the time, Daniel Alpert, got together with Donald Bitzer to see if Don could quickly come up with a prototype that could serve as proof-of-concept. This prototype, running on an Illiac-I, became PLATO. The project was subsequently funded in 1960 by government money from the Joint Services Program. The lab grew and became the Computer-based Education Research Laboratory (CERL). PLATO eventually spawned a variety of commercial ventures, starting in 1975 with Control Data Corporation (CDC), a mainframe computer manufacturer founded in 1957.

The complicated histories of the various branches of the PLATO tree are beyond the scope of this website. One of the branches became CYBIS, a product of VCampus; another branch is owned by PLATO Learning, the company that retains the right to the PLATO name; a third became NovaNET, now owned by Pearson Education. Our system, cyber1, is a branch off of the CYBIS tree.

The long list of enthusiasts lives in the group “ControlFreaks” (former employees, affiliates and users of the Control Data Corporation). Among them are those who receive credit for the work that is now, Cyber1: