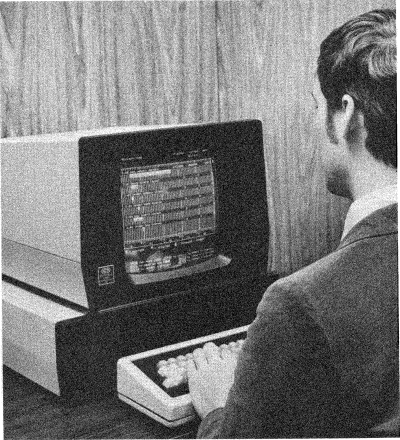 The PLATO IV computer-based education system was developed in the Computer-based Education Research Laboratory (CERL) of the University of Illinois, Urbana. PLATO IV is the result of 15 years of research and development effort led by Donald Bitzer, director of CERL. The University of Illinois system presently links 950 graphical-display terminals to a large Control Data Corporation computer in Urbana. Some of these terminals are located as far away as San Diego and Washington, D.C. Additional PLATO systems with their own complements of termi¬nals are located elsewhere in the United States. Students are individually tutored at terminals by interacting with PLATO lesson materials created by teachers. There are over 4,000 hours of PLATO lessons already available. These lessons span a wide range of subject areas and are used by students in elementary schools, community colleges, military training bases, universities, and commercial training programs. Authors of lesson materials are teachers who use the TUTOR language to tell PLATO how to interact with students on an individual basis. This book explains the TUTOR language in detail and is intended to help authors write quality lesson materials.

In 1967, Paul Tenczar (then a graduate student in zoology) conclud¬ed that existing methods of creating computer-based lesson material on the earlier PLATO III system were unnecessarily difficult. As a result he originated the TUTOR language. There followed a rapid increase in the number of authors and in the number and degree of sophistication ofthe lessons they wrote. This active author community in turn spurred the continual development and refinement of TUTOR by requesting addi¬tional needed features. In 1970, CERL began implementing the PLATO IV system, which afforded a rare opportunity to take stock of the evolution of TUTOR up to that point and make a fresh start. Many useful simplifications were made, and many important features were added. The growth of PLATO IV into a continental network brought together an ever-wider spectrum of authors through the rich interpersonal communi¬cations facilities available on PLATO, and the suggestions and criticisms from these authors contributed to the present form of the TUTOR language. Also of great importance has been the large number of students who have used PLATO lessons, and whose experiences have influenced the development of TUTOR to meet their needs. The TUTOR language described in this book is, therefore, based on heavy use-testing.

In the earliest phase Paul Tenczar and Richard Blomme were mainly responsible for TUTOR development. Since then, many people have been involved, some as full-time CERL staff members and some as high school, undergraduate, or graduate students. It is impossible to adequate¬ly acknowledge the various contributions, and difficult even to list all of those who have played a major role, but an attempt should be made. Paul Tenczar is head of TUTOR development. Full-time people have included David Andersen, Richard Blomme, John Carstedt (Control Data), Ruth Chabay, Christopher Fugitt, Don Lee, Robert Rader, Donald Shirer, Michael Walker, and this author. They have been assisted by James Parry and Masako Secrest, and by Doug Brown, David Frankel, Sherwin Gooch, David Kopf, Kim Mast, Phil Mast, Marshall Midden, Louis Steinberg, Larry White, and David Woolley. William Golden has also provided useful advice.

All of these people have been involved mainly with “software”, the programming of the PLATO computer in such a way as to permit authors and students to write and use computer-based lessons. Of equal impor¬tance to the technical success of PLATO are the CERL scientists, engineers, and technicians who invented, designed, and implemented the unique terminals and telecommunications devices (“hardware”) which form the PLATO educational network. CERL personnel who have been heavily involved in hardware development include Donald Bitzer, Jack Stifle, Fred Ebeling, Michael Johnson, Roger Johnson, Frank Propst, Dominic Skaperdas, Gene Slottow, and Paul Tucker.

The latter part of Introduction is adapted from a PLATO III document, “The TUTOR Manual”, by R. A. Avner and P. Tenczar.

I thank Elaine Avner and Jeanne Weiner for editorial assistance, Sheila Knisley for typing, and Stanley Smith for photographic work. I appreciate the encouragement William Golden gave me to finish the task.