It is sometimes desirable to associate a string of several characters with a single key. For example, the symbol may be produced by v, backspace, superscript, minus sign. It is possible to set up a “micro table” so that v may be produced simply by hitting the MICRO key followed by hitting “v”. Similarly, the micro table might specify that MICRO-e should be equivalent to typing e, shift-SUPER, k, x, SUPER, 2, shift-SUB to make e kx2. The micro table makes possible a kind of shorthand which can be useful both to authors composing -write- statements and to students typing complicated responses.

Like character sets, micro tables reside in lesson spaces. If lesson space “italian3” contains a micro table named “dante”, these micros can be made available to students by the statement:

As with -charset-, the -micro- statement should be placed in the “ieu” (initial entry unit).

This figure demonstrating micro table edit20 shows how an author defines an item in a micro table, by associating a string of characters with a particular key. Later the effect of striking MICRO followed by this key is identical to typing this string of characters. With a “force micro” in effect, the student does not even have to press MICRO. This makes it easy to redefine the keyboard. 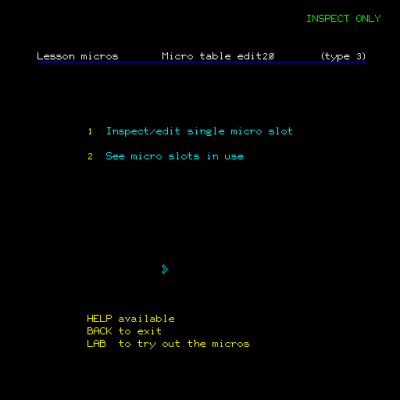 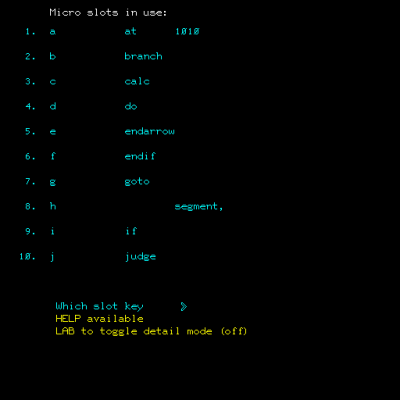 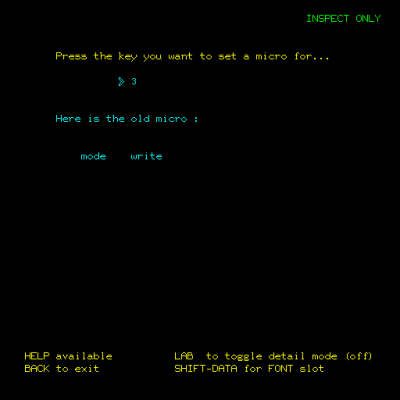 If you do not specify your own micro table, a standard one is provided that lets you use the MICRO key as though it were the ACCESS key. For example, MICRO-p gives ACCESS-p, which is 7r. This means you can (and should) mention only the MICRO key to students in your typing directions to them. It is not necessary to mention ACCESS. Note, however, that ACCESS-p must be used to make a Tr if you have your own micro table with a different definition for MICRO-p.

The Graphing Commands: Plotting Graphs with Scaling and Labeling