How to Use This Book

This book describes in detail the TUTOR language, which is used by teachers to create lesson materials on the PLATO IV computer-based education system. Teachers use the TUTOR language to express to the PLATO computer how PLATO should interact with individual students. Students and teachers interact with PLATO through terminals each of which includes a plasma display panel screen and a typewriter keyboard, as shown. Using TUTOR, an author of a computer-based lesson can tell PLATO how to display text, line drawings, and animations on the student's screen. The author can ask PLATO to calculate for the student, to offer the student various sequencing options, and to analyze student responses.

The TUTOR language was originally created and developed for educational purposes. However, educational interactions are probably the most subtle and difficult of all the interactions a person might have with the author of materials presented through a computer. It is now clear that other kinds of interactions are also handled well by means of TUTOR, including recreation and communication. Nevertheless, for concreteness this book will concentrate on the instructional applications of TUTOR.

It is hoped that you have already studied the textbook “Introduction to TUTOR” by J. Ghesquiere, C. Davis, and C. Thompson, and the associated PLATO lessons. These materials are designed to teach you not only basic aspects of TUTOR but also how to create and test your own lessons on the PLATO system. The present book, “The TUTOR Language,” does not attempt to describe the latter aspects, such as how to insert or delete parts of your lesson and how to try out your new lesson. It does cover all aspects of the TUTOR language: that is, what statements to give PLATO but not how to type these statements into a permanent PLATO lesson space. By studying this book you could, in principle, write down on paper a lesson expressed in the TUTOR language, but when you go to a PLATO terminal to type in your new lesson, you may not know what buttons to push to get started. Also, this book discusses TUTOR in more detail than does “Introduction to TUTOR,” which makes “The TUTOR Language” less appropriate for your initial study.

It is also hoped that as you study this book you will try things out at a PLATO terminal. TUTOR is designed for interactive use, in which case an author writes a short segment of a lesson, tries it, and revises it on the basis of the trial. Normally, the sequence write, try, revise, and try again takes only a few minutes at a PLATO terminal. It is far better to create a lesson this way than to write out a complete lesson on paper, only to find upon testing that the overall structure is inappropriate.

It is also helpful to try the sample lesson fragments discussed in this book. It is literally impossible to describe fully in this book how the examples would appear on a PLATO terminal. The PLATO medium is far richer than the book medium. One striking example is the PLATO facility for making animations such as a car driving across the screen. As another example, you must experience it directly to appreciate how easy it is at a PLATO terminal to draw a picture on the screen (by moving a cursor and marking points), then let PLATO automatically create the corresponding TUTOR language statements which would produce that picture. PLATO actually writes a lesson segment for you!

This book is written in an informal style. Sometimes, when the context is appropriate, topics are introduced in a different chapter than would be required by strict adherence to a formal classification scheme. In these cases, the feature is at least mentioned in the other chapter, and the index at the end of the book provides an extensive cross-linkage. The order of presentation, emphasis, examples, and counter-examples are all based on extensive experience with the kinds of questions working authors tend to ask about TUTOR.

If you are a fairly new TUTOR author, read this book lightly to get acquainted with the many features TUTOR offers. Plan to return to the book from time to time as your own authoring activities lead you to seek detailed information and suggestions. Your initial light reading should help orient you to finding appropriate sections for later intensive study. After you feel you know TUTOR inside and out, read this book carefully one last time, looking particularly for links among diverse aspects of the language. This last reading will mean much more to you than the first!

If you are already an experienced TUTOR author, read this book carefully with two goals in mind: to spot features unused in your past work but of potential benefit, and to acquire a more detailed understanding of the structural aspects of the language, with particular emphasis on judging.

The remainder of this introductory chapter contains some interesting examples of existing PLATO lessons, a description of the PLATO keyboard including the use of the special function keys, and a review of the most basic aspects of TUTOR.

Figures 1-1 through 1-6 on the following pages give several examples of interesting PLATO lessons. All were written in the TUTOR language. They have been chosen to give you some idea of the broad range of TUTOR language capabilities. Each example is illustrated with a photograph of the student's screen at a significant or representative point in the lesson. (See the note at the bottom of pg. 7.)

The PLATO terminal's display screen consists of a plasma display panel which contains 512 horizontal electrodes and 512 vertical electrodes mounted on two flat plates of glass between which is neon gas. Any or all of the quarter-million (512 x 512) intersections of the horizontal and vertical electrodes can be made to glow as a small orange dot. (The word “plasma” is the scientific name for an ionized gas; the orange glow is emitted by ionized neon gas.) As can be seen in the sample photographs, the PLATO terminal can draw lines and circles on the plasma panel as well as display text using various alphabets. Both drawings and text are actually made up of many dots. TUTOR has many display features for writing or erasing text and drawings on the plasma panel. 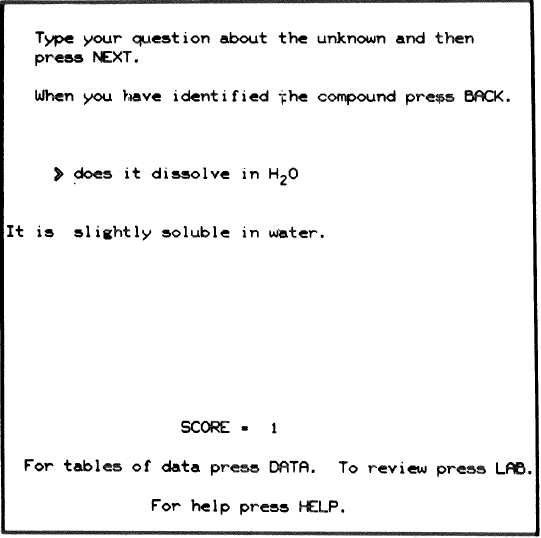 Dialog in which a chemistry student attempts to identify an unknown compound by asking experimental questions. Stanley Smith 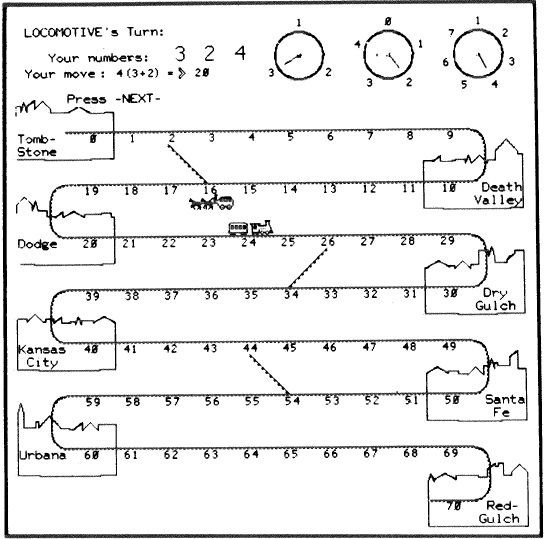 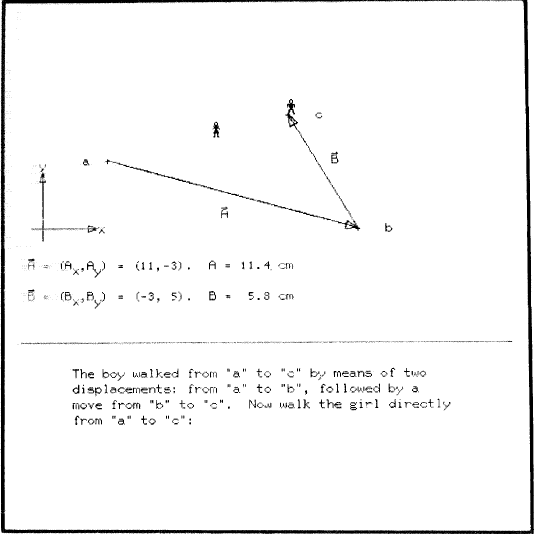 Tutorial on vectors in which the student walks a boy and girl around the screen and measures their vector displacements. Bruce Sherwood 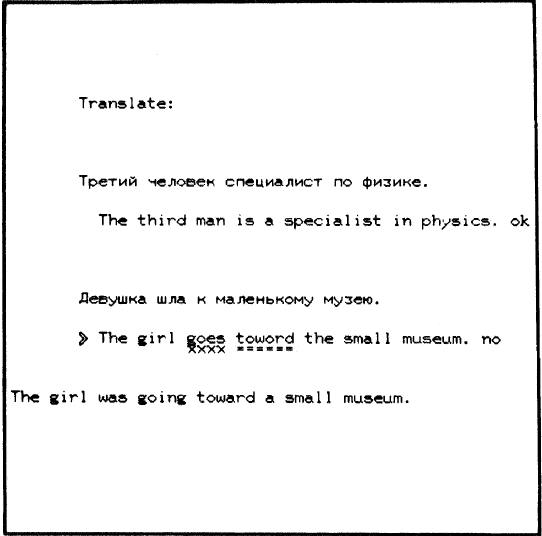 Russian sentence drill. The markings under the student's translation of the second sentence indicate incorrect words and misspellings. Constance Curtin 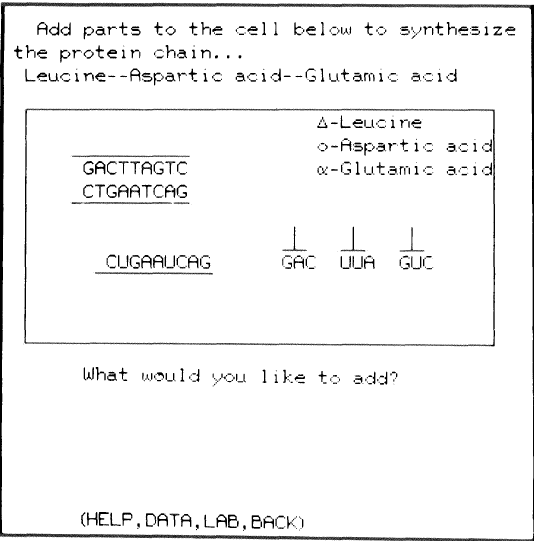 Graphical illustration of the biochemical steps involved in protein synthesis. The student introduces appropriate DNA, RNA, etc., into an initially empty cell, then watches the synthesis proceed. Here the synthesis breaks down for lack of a crucial part. Paul Tenczar 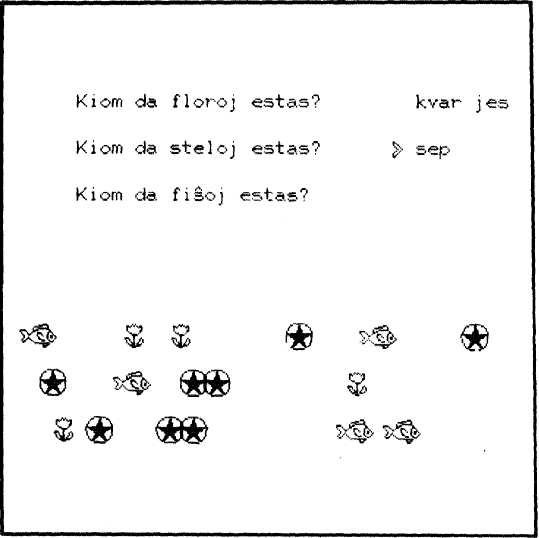 Using graphics to teach Esperanto without using English. Here the stars have been circled to emphasize the student's mistake in counting. Judith Sherwood

These are actual photographs of the plasma panel. The display shows orange text and drawings on a black background, but the pictures are shown here as black on white for ease of reproduction. The plasma panel size is 22 cm. square (8.5 in. square).