In their simplest form, lessons administered by the PLATO interactive educational system consist of a repeating sequence: a display on the student's screen followed by the student's response to this display. The display information may consist of sentences, line drawings, graphs, animations (moving displays)–nearly anything of a pictorial nature, and in any combination. The student responds to this display by pressing a single key (e.g., the HELP or NEXT key), by pointing at a particular area of the screen, by typing a word, sentence, or mathematical expression, or even by making a geometrical construction. Lesson authors provide enough details about the possible student responses so that PLATO can maintain a dialog with the student. The sequence of a display followed by a response is the basic building block of a lesson and is called a “unit” in the TUTOR language. This “display-response” terminology is convenient but is not intended to imply that the student is in a subservient position. Often what we will conventionally call the student “response,” is a question or a command issued to PLATO to respond with a display of some kind.

An author constructs a lesson by writing one unit at a time. For each unit, the author uses the TUTOR language to specify: (1) the display that will appear on the student's screen; (2) how PLATO is to handle student responses to this display; and (3) how the current unit connects to other units.

A statement written in the TUTOR language appears as follows: 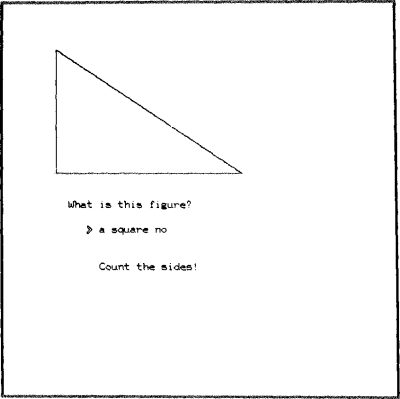 We will discuss each statement of this unit in detail.

The -unit- statement initiates each unit. The tag (geometry) will become useful later when units are connected together to form a lesson. Each unit must have a name. No two units in a lesson may have the same name. 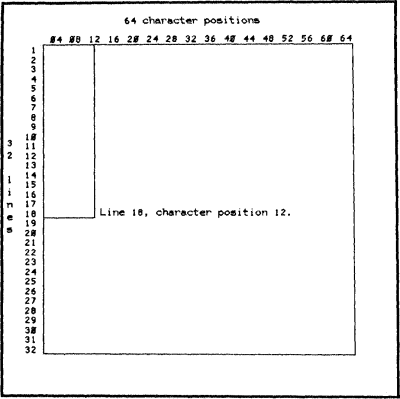 write What is this figure?

The -write- statement causes the text contained in the tag to be displayed on the student's screen. The writing starts at line 18, character position 12, as specified by the preceding -at- statement.

The -draw- statement specifies a straight-line figure to be displayed on the screen. In this particular case a series of straight lines will be drawn starting at location 510 (line 5, character position 10), going vertically downward to location 1510, then to the right to location 1540, and finally back to the starting point, 510. This produces a right triangle on the student's screen.

The -answer- and -wrong- statements are used to evaluate the student's response. The special brackets < and > enclose optional words, while the parentheses enclose important words which are to be considered synonyms. Thus any of the following student responses would match the -answer- statement: “a right triangle”, “it is a rt triangle”, “rt triangle”, etc.

Having matched the student's response, TUTOR proceeds to execute any display statements following the matched -answer- or -wrongstatement. Thus, student responses of “a right triangle” and “square” will trigger appropriate replies. In the absence of specific -at- statements, TUTOR will display these replies three lines below the student's response on the screen.

Special help is provided to the student if his answer is partially correct. Here is what happens if the student responds with “a lovely tringle, right?”:

TUTOR automatically marks up the student's response to give detailed information on what is wrong with the response. The word “lovely” does not belong here and is marked with xxxxxxx, the ∆ shows where a word is missing, the word “tringle” is misspelled and is underlined, and the word “right” is out of order, as is indicated by the small arrow. Statements can be added to the current example unit which will greatly improve it. Consider the following:

As you can see, any number of -answer- and -wrong- statements can be added to the response-handling section of the unit. Time and effort spent by an author in providing for student responses other than the common answer can greatly increase the ability to carry on a personal dialog with each student. Figure 1-10 shows what the student will see if he responds with “a triangle”. The construction “three*sided” is called a “phrase”. A phrase is a set of words to be considered together for purposes of spelling and word order. As another example, a question about Columbus's flagship might involve the phrase “Santa*Maria”.

The -specs- statement is introduced here. It is used to give optional specifications on how the student's response is to be handled. In this case the tag, “okcap”, specifies that any capitalization in the student's response is optional. Without this specification, TUTOR would consider “Right Triangle” to be misspelled. There are many convenient options available in a -specs- statement. For example, “specs okextra,noorder” specifies that extra words not mentioned explicitly in following -answerand -wrong- statements are all right, and that the student's word order need not be the same as the word order of the -answer- and -wrongstatements to achieve a match. Such options can be used to greatly broaden the range of responses which can be handled properly.

Lessons could be written using only the commands already discussed. Explanatory units could be written using only display commands. Tutorial units could be interspersed to test a student's understanding of the lesson material. Thus a single linear chain of units could form a lesson. However, mastery of a few more TUTOR commands opens up a wealth of “branching” or sequencing possibilities. Branching, the technique of allowing alternate paths through a lesson, is one of the keys to personal dialog with each student. The example unit will, therefore, be expanded to include -next-, -nextnow-, -back-, and -help- commands:

The tag of the -next- statement following the -unit- command gives the name of the next unit the student will see upon the successful completion of unit “geometry”. The -next- statement is necessary because the next unit for a student in a highly-branching lesson sequence may not be the unit following in the lesson. For example, a diagram of the lesson flow involving unit “geometry” might be:

In moving from one unit to another the screen normally is automatically erased to make room for the displays produced by the following unit. 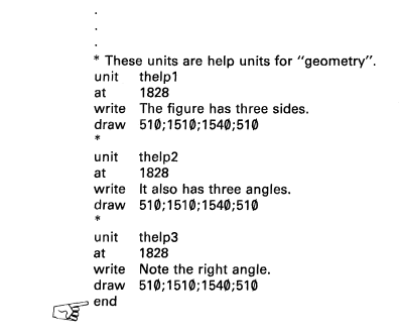 Any statement which begins with an asterisk (*) has no effect on the operation of the lesson and may be used anywhere to insert comments which describe the units. A comment statement between units improves readability by guiding the eye to the unit subdivisions of the lesson.

If the student calls the figure “a square”, he or she will see this response judged “no” and get the reply “Count the sides!” The -nextnow- statement is used to force the student through additional material. It locks the keyboard so that only the NEXT key has any effect. In particular, the student cannot erase his or her response. When the student presses NEXT, he or she will be sent to unit “treview”. Upon completion of one or more units of review about triangles, the author might return the student to unit “geometry”. Thus, this student's lesson flow might consist of:

Consider now the problem of using unit “geometry” for a second student response. Additional display information is needed to ask the student a second question, and another -arrow- command is needed plus a second set of response-handling statements. The unit could appear as follows: 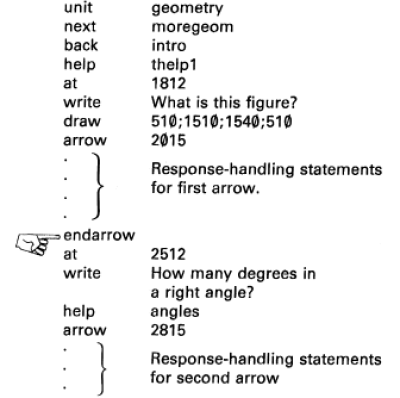 The -endarrow- command delimits the response-handling statements associated with the first -arrow-. Only when the first -arrow- is satisfied by an “ok” judgment will TUTOR proceed past the -endarrow- command to present the second question. The statement “help angles” overrides the earlier statement “help thelp 1”. If the student presses the HELP key while working on the second -arrow- he or she will reach unit “angles” rather than unit “thelp1”. The second question could have been given in a separate unit rather than following an -endarrow- command. The major difference is that the entire screen is normally erased as the student proceeds to a new unit, whereas here the second question was merely added to the existing screen display. Even if there is only one -arrow- command in a unit, -endarrowcan be useful, for it can be followed by display or other statements to be performed only after the -arrow- is satisfied. This is particularly convenient if there are several -answer- commands corresponding to several different classes of acceptable responses. Fourteen TUTOR commands have been illustrated in this chapter. This repertoire is adequate to begin lesson writing. If you have access to a PLATO terminal, it would be useful at this point to try out the ideas discussed so far.